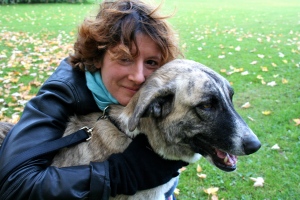 TUESDAY, November 10 – I was throwing out odds and ends. Starting with the contents of her purse. Was the word ‘horrible’ invented for moments like this?  Her tampons, lip gloss, a small pink bag with a pair of panties, in case her period came unexpectedly. Lifeless crap. A sales slip from the hairdresser’s : Coloring €48.50.  The Tuesday before the accident we’d gone to the hairdresser’s together. I’d just taken photos of the dog in the park.  With the boys.  With her. Got a fabulous shot of her with her unruly curls, trimmed and tinted that same afternoon.

15:30 – You were here again, Jennifer. This time in the park, where Elsa and Eamonn and I were racing around on a field of grass. Again, we sensed a presence, a perceptible dimension suspended all around us: your presence, a tangible blanket that made itself felt briefly – but long enough to get the lay of the land.  I let it come over me, and accepted it for what it was.  Beautiful.  I don’t ask myself questions.  I don’t want to hear that it was just my imagination.

Ten minutes later, we were walking down the street and I hear the sound of boots. It’s a woman who wants to pass us.  I look around, half expecting to see your curly hair, the black leather jacket, the blue scarf and those sturdy boots. It wasn’t you, Jennifer. It was just someone who sounded like you.