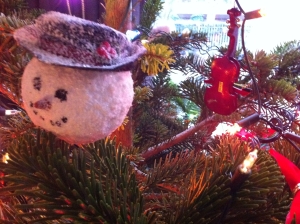 TUESDAY, December 22 – Part of it is jet lag, of course, but I find myself depressed by the triviality of New Jersey.  The Marketfair Mall, for example, where for eighteen years I regularly watched Jennifer walk into and out of each and every store.

It’s around the corner from the movie theater and Victoria’s Secret where I used to buy beautiful lingerie for her. There was Baby Gap, where she’d buy outfits for nieces and nephews and the children of friends. And next door, the grown-up Gap where we bought our jeans. At the far end of the mall there was a Barnes & Noble, where we’d wander around for hours, often taking home three, four, five or six books. And sometimes we just settled for coffee and chocolate chip cookies.

There was a theater where we used to sit in the car for hours after the movie, or outside on the curb looking up at the stars and chatting. Or in silence, listening to the crickets. This is the movie theater where nothing ever changed:  there was always the same man who tore our tickets in two and waved us in – and that’s only the mall.

Further up on Route 1 we paid our traditional visit to Target. I saw Jennifer in each and every aisle, strolling in her flip-flops, hunting for bargains in the Girls’ Department. I bought the second season of the Mad Men series, one of our favorites. We’d gotten about half-way, and I couldn’t really see myself finishing the series all alone. I bought the DVD pack, without quite knowing why.

21:00 – They’re decorating the tree. One more damned tradition:  Grandma always waited until her daughter and the grandchildren arrived to decorate the tree. This time Eamonn and Sander were helping her. Then, on top of everything, Jenn’s favorite ornament got smashed to pieces. A silver-orange-and-blue New York Mets ball. I deposit the remains in the trash can. Still, there’s an empty spot in the tree, only visible to us.