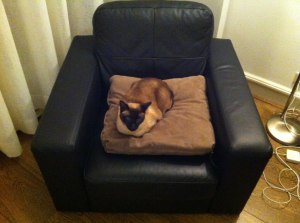 TUESDAY, January 19 – The cat hasn’t come home. After almost 24 hours outside I’m beginning to worry about the cat, of course, but even more about what it would do to the boys if worse came to worse …

21:00 Crisis averted. Late that afternoon I told the boys that Bodhi was gone. Of course, those weren’t my exact words. I said simply, ‘He’s still outside.’ Sander was about to leave for conservatory, and didn’t pay too much attention, but Eamonn was immediately concerned. He wanted to go outside and start looking for him.

‘We’re going to have dinner first’, I said, which we did, even though Eamonn couldn’t eat anything. We called his name, looked under all the parked cars, walked down all the streets in our neighborhood, except for the street that we had carefully avoided since October. When we got home, Eamonn decided he was going to have posters printed to hang up all over the neighborhood.

It was clear what was going through his mind as well as mine and Sander’s. ‘I don’t think I can handle losing another member of the family,’ he said quite frankly as well as thinking that, ‘Maybe Bodhi is looking for Mom.’

This is the sum of anxiety and mortality, I realized when I saw the panic in Eamonn’s eyes. As the printer was busy spitting out twenty posters and Eamonn was putting on his shoes and coat, we suddenly heard a clear ‘meow’ on the other side of the front door. We both yelled his name. ‘Bodhi!’

Never before had I been so glad to see the annoying Siamese feline. The animal was oblivious to our concern and immediately demanded a bowl of food at the top of his voice which immediately arrived with a bit extra – just this once.